Man whose girlfriend relocated to the UK when he was in 100l, shares what became of their relationship after her departure

He shared this while reacting to a viral tweet of a lady who disclosed that she left a man she was dating in Finland to pursue her PhD in Canada. According to her, if the man wanted the relationship to continue, he should find a way to get to Canada on his own.

Reacting, the man with Twitter handle @divinedarling, recounted his personal experience with his girlfriend and how he supported her to pursue her dream at the expense of their relationship.

According to him, they didn’t see physically for seven years but are now happily married with children. He went on to encourage people to encourage their significant other to pursue purpose and accomplish their dreams.

“2004 I was in first year medical school, when my ‘girl friend’ visited me from Lagos and told me she got visa to UK and will be moving.

That night I thought hard about it, and could hardly sleep. She said she had got everything ready except flight ticket which was about 160k

In the morning, I decided to let her go, if it is meant to be we will work it out. A year earlier I met when I was processing my student visa to Uni Omaha for a Pre-pharm. And no jupita could have stopped me from going had I got the visa.

Before she left, I took her to the salon and got her hair braided, I gave the money for the flight ticket. And watched her enter Ifesinachi bus back to Lagos, not knowing if I would see her again. She flew out that Saturday.

She never came back and hasn’t come back to Nigeria since then. I never travelled out until 7yrs later after my internship. Today, I am married to that same lady. And we are blessed with children.

Marriage should be a union of purpose and vision. Each should encourage the other to pursue their dreams and accomplish his or her purpose.

Guess what; from my second year, I never bought clothes or phones for my self. She was sending clothes and designers perfumes, newest Nokia phones each year, while I was sending food stuffs. She was calling almost on daily basis, on normal call. She got me my first laptop.”

Following questions from netizens about how they handled their sexual urge during their long distance relationship, the man hinted that he married his wife as a virgin and she didn’t sleep with anyone while she was away.

See his tweets below, 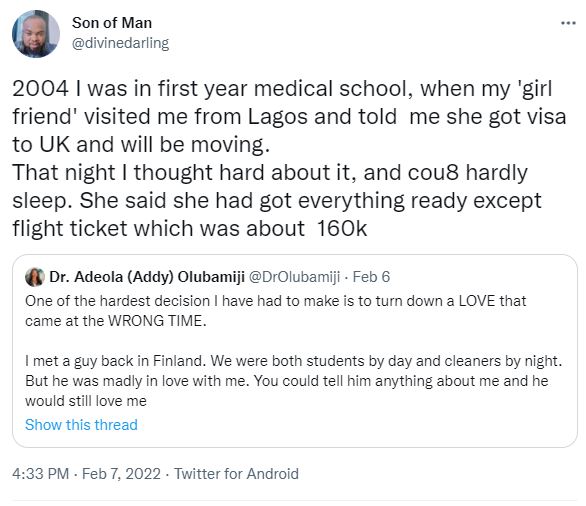 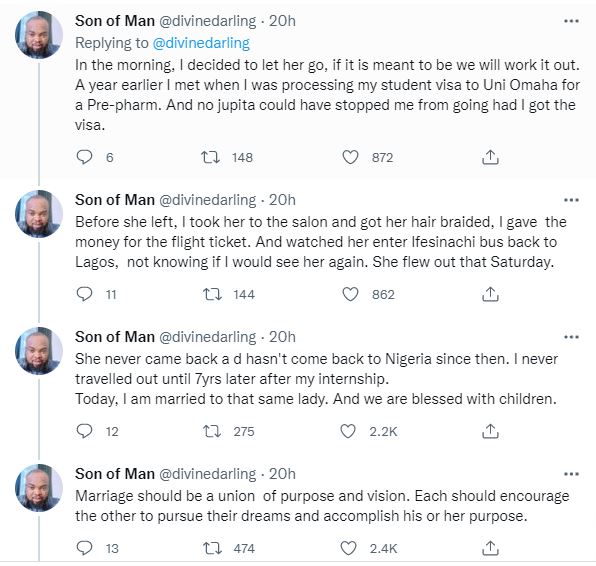 Moment a python ‘took’ a sacrifice at a river in Anambra...

Photo of veteran actor, Pete Edochie, and his first son