The Minister of Works and Housing, Babatunde Fashola, has said he is running for President of his home. Fashola disclosed this while distancing himself from vying for the presidency in 2023.

The former Governor of Lagos State disclosed this when asked by a journalist on his plans for the presidency in 2023.

This was disclosed in a tweet by President Muhammadu Buhari’s Special Assistant on Digital/New Media.

Fashola said he would return to his family at the end of his service as a minister.

“A: I’m running for the President of my home. I’m going to Lagos. My wife and children are waiting for their President. All those who want to run, I wish them the very best of luck… For those looking for headlines, I have disappointed you.”

The general election will take place in 2023.

There have been speculations that the former Lagos governor will run for President. 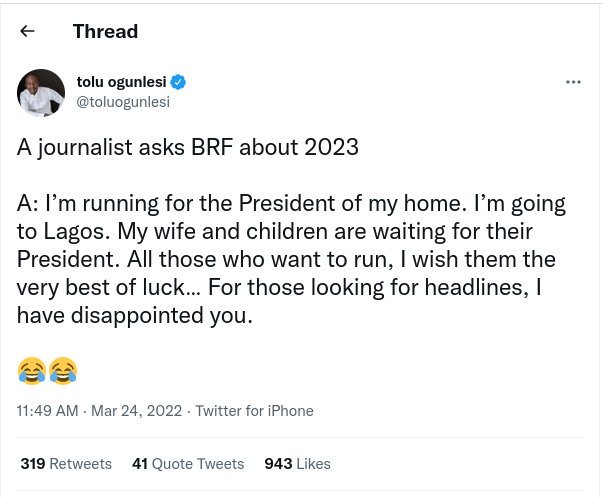 This was same governor that was stuffing his outfit with dollars... N1trillion to fund the construction of 1,963km of roads across Nigeria