A Journalist has narrated how he was allegedly humiliated by soldiers and policemen while recording a stampede scene at MKO Abiola stadium after the match between Nigeria and Ghana.

Shina Oludare revealed that he was flogged by the security operatives who also broke his phone’s screen even after he identified himself as a journalist.

He also disclosed that he has never been that humiliated in over 12 years of his profession. The journalist wrote;

While recording a stampede scene at the entrance of the M.K.O Stadium, d military (3 army & several policemen) attacked me, flogged d hell out of me & broke my phone despite identifying myself as a journalist with my accreditation hung around my neck. #NGAGHA

I was not given a chance to express myself as slaps landed on my face. In my over 12 years in this profession, I have never been this humiliated. 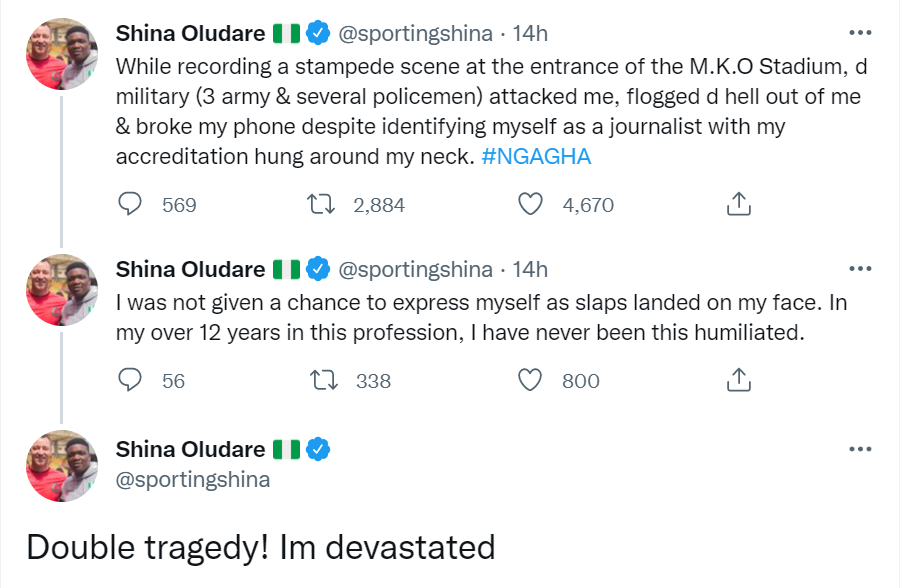 Rauf Aregbe Shola caught on camera, harrassed inside a restaurant in The US [Watch the embarrassing Video] Reno Omokri: Twitter ban on Reno Omokri, after signing over 35,000 petition on Change.org

Self-confessed ritualist who comes from Ibadan to Lagos to steal children...