Anambra State Governor, Prof Chukwuma Soludo, on Friday put paid to the sit-at-home by the Indigenous Peoples of Biafra and ordered the state’s civil servants and markets to resume work on Mondays.

The order to the civil servants was issued in a memo by the state’s Head of Service, Barr. Theodore Igwegbe, who said it in a bid to reposition state for better performance.

He said any worker that fails to turn up for work will be punished for misconduct.

At a separate meeting with market leaders, Soludo said the state government would no longer tolerate the shutting down of markets on Mondays.

He and the market leaders agreed that markets would reopen fully on Monday April 4, 2022.

Sokudo held a town hall meeting with all the market leaders in all Anambra markets and also the leaders of the respective transport unions in the state.

The meeting which took place at the Professor Dora Akunyili Women Development Center Awka, was attended by the Deputy Governor, Dr Onyekachukwu Ibezim, the Secretary to the State Government, Professor Solo Chukwulobelu, Security Agencies, among others.

The Governor who noted that the market leaders and transporters are critical stakeholders in the new Anambra project said that the economy of Anambra is dominated by the commercial sector.

He restated his commitment towards cleaning up all the markets but empathized that all must join hands to restore Anambra to it’s prime status.

He said that his administration will review the market leadership, park management system and promised to restore the master plan of Onitsha.

The Governor regretted the way people erect structures against the physical planning of the state and maintained that his administration will not entertain such primitive conduct.

The Governor assured to conduct a free, fair and open election in all the markets and review their terms of reference in the interest of the state come next year.

Governor Soludo said that the goal is to make doing business in Anambra a pleasurable experience and empathized that the Monday sit- at-home should end as a way of achieving that objective but noted that his government is open for dialogue against breakdown.

Maintaining that Anambra loses about 19.6 billion naira at every Monday sit-at-home, Governor Soludo said that there are better ways to channel protests and agitations rather than suffering the Innocent.

Governor Soludo who noted that there is no conflict that dialogue, in good faith, cannot resolve, reiterated his governments determination to urgently restore peace and security in Anambra, and sorts for the active cooperation and collaboration of all stakeholders even as he harped on the need for those in the bush to lay down their arms and join in building the state.

It was unanimously resolved at the meeting that starting from 4th April 2022, all Anambra markets and roads should be busy with usual commercial activities.

The President, Anambra Amalgamated Traders Association, ASMATA, Chief Ikechukwu Ekwegbalu in a vote of thanks, assured that they will continue to support the policies and programs of the government directed towards making Anambra a more livable place. 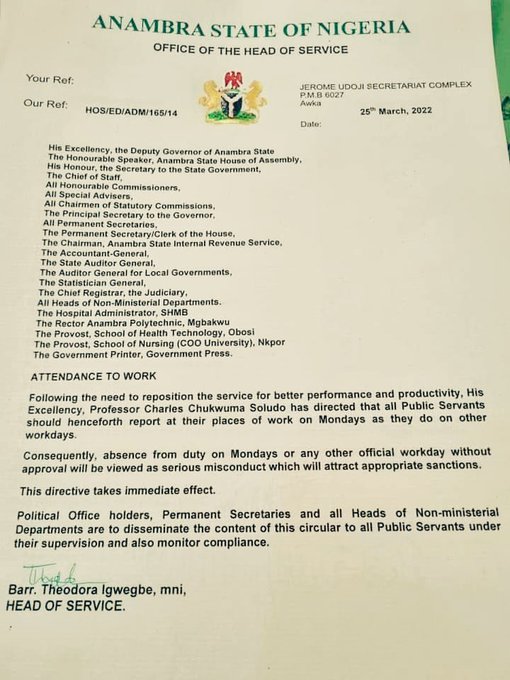 Customers shocked to find live centipede in the bowl of isi... “Baby calm down” Unilag replies Rema after he complained about ASUU...

Teenage girl escapes from captivity after being abducted by alleged suitor...