Irate adolescents in Sokoto killed and burned a female student of the Shehu Shagari College of Education, according to Channelstv.com.

Deborah Samuel, a level two student, was accused of producing a social media post that blasphemed the holy prophet Muhammad, according to the police (SAW).

According to the police, the students dragged the victim from the security room where she had been hidden by school officials, killed her, and set fire to the building.

However, Rev. Fr. John Chinenye Oluoma, a Catholic priest in Abuja reacts to the incident in a recent post on Facebook.

He said that one needs to be clear on this heinous crime that took place in Sokoto state because it is not a religious problem, no one should even attempt to cheapen it with stupid religious coloration. It’s purely a legal and governance issue.

He said that it the Nigerian state cannot prosecute day light murderers in whatever guise, then it cannot make a claim to legitimacy. Only a failed state will not arrest and prosecute such audacious murderers and their enablers.

He said that we must direct our anger at the government and hold it responsible for justice. Making this a religious issue is tantamount to absolving government from it’s responsibility. 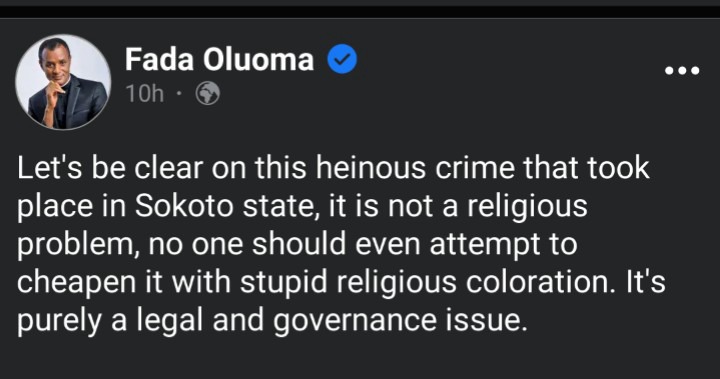 Scripture does not condemn polygamy at all. It approves polygamy – Reno Omokri replies Fr Oluoma and others who kick against polygamy

I must leave this country- Nigerian student says after policemen in... Yul Edochie’s brother, Linc dissociates himself from his second marriage to...