A fuel attendant has allegedly been shot dead by a soldier during a scuffle in Minna, the Niger State capital. The incident happened at Shafa filling station located near Obasanjo Complex on Monday, June 20.

According to a Facebook user, Mohammed Usman, the soldier shot the attendant after the deceased allegedly threatened him with a cutlass.

“It was reported that the soldier had a spat with the fuel attendant which escalated to a fight with the Fuel Station Manager, that resulted in them exchanging slaps,” Usman narrated.

“Angered by the soldier’s behavior, the young fuel attendant slapped him and threatened him with his cutlass. The soldier pulled out his gun and shot the fuel attendant, who was rushed to the hospital. Subsequently, were were informed that the Fuel Station had been closed down.” he added.

Abdulkareem, an eyewitness, who spoke to Punch , said the soldier was engaged in a scuffle with the fuel station manager which led to both parties slapping each other.

“The soldier and the manager were having a misunderstanding. Though I don’t know who slapped first but they both slapped each other and people started trying to intervene,” Abdulkareem said.

He also said that as a result of the scuffle, one of the station attendants, who was said to be the brother of the manager, brought out a cutlass and stabbed the soldier who in turn shot him.

“As people were trying to settle the misunderstanding, one of the attendants, who is the younger brother of the manager, came to support his brother in the fight by bringing out a cutlass and stabbing the soldier”.

He added that the soldier in turn brought out his gun and shot the boy who was then rushed to the hospital.

Another eyewitness said the boy didn’t stab the soldier but brought out his cutlass to threaten him before the soldier pulled out his gun and shot the boy.

He added that the boy did not make it to the hospital as he died before they got to the general hospital. 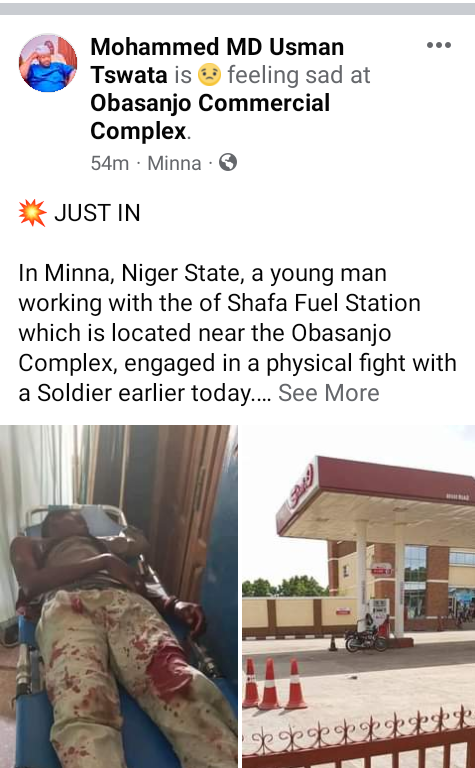 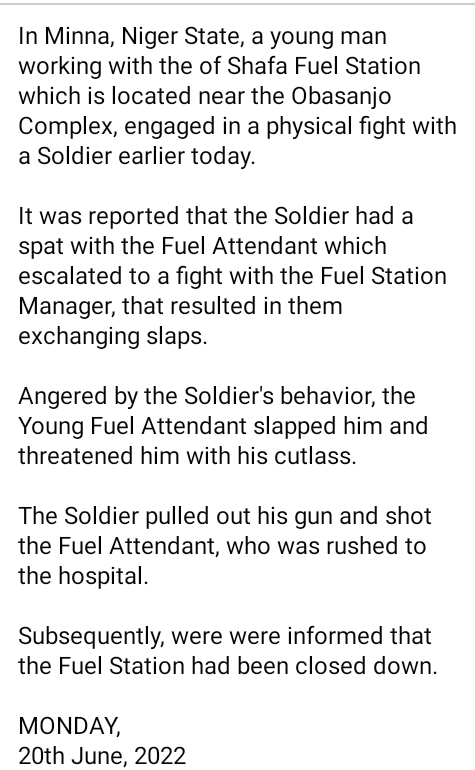 Marrying a second wife my best decision in life — Yul... Businesswoman shares heartbreaking story of how she lost her child 3... Yahoo Boy Murders Girlfriend In Bayelsa, Buries Her In His Room...